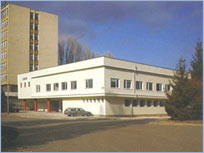 “BETA FEST” LLC was founded in 1994 by four partners, specialists in Department “Cybernetics” of the German Company “FESTO” GmbH, which produces pneumatics and industrial electronics and has branches in more than fifty countries with production experience of over forty years.

In the early stage of its foundation the company maintains the production process with personnel of only ten employees. The favorable market conditions, characterized by a lack of competitive companies, producing a similar type of machines and the developing industrial potential in the sphere of food industry, enhance the fast growth of the company.

So in 1997 the company enlarges its production in Ukraine by the foundation of the filial “Electron Fesf \ which is entirely owned by ‘”BETA FEST”.

The products of the company are purchased out of the country, but on the home market they tend to have a leading position, as the prices of the machines are relatively low, compared to the prices of the imported machines. Also their quality is much higher as the imported ones are purchased by the newly founded Bulgarian companies mainly second hand.

In the same year the company founded a new filial in the country in the town of Stara Zagora. One part of the machines that comprise the linear conveyers, produced by “BETA FEST” is tested there.

In 1999 the production capacity of the company was increased and that is way a building was purchased with the surrounding area. The total area is 4 400 square meters and it is situated in one of the industrial regions in Sofia. In this way the industrial independence of the company is secured.

In 2004 a system of quality assessment Bulgarian State Standard EN ISO 9001 – 2001 was developed and is now in process of implementation. In that way the company becomes quite precise with its customers and it can also guarantee the quality of the products, as well as their maintenance.

Other services performed by the company arc the following:

Maintenance of the disorders within one working day; к   Financial leasing for the purchase of the machines; r   Consulting and assisting the customers with the design of their production

Providing the customers with new technologies (know-how of “BETA FEST”)

for bottling of the products; >   Modernizing and updating of the old equipment of the customers.